A Committee headed by Justice Verma and a Commission of Inquiry headed by Usha Mehra were constituted in the wake of rape of a para-medical student in a moving bus in Newdelhi. The Delhi Gangrape Case has fired up a lot of emotions among the youth in the Country and every one has been trying to lend a voice to this new awakening.

The Central IAS Association has also made some suggestions on various aspects related to Women’s Rights which has inputs contributed by various officers and eminent persons.

The text is given below for use by Citizens and for wider discussion. Feel free to use it any way you like. You can send the link or copy and paste any part of it and email it to justice.verma@nic.in upto Jan 05, 2013. 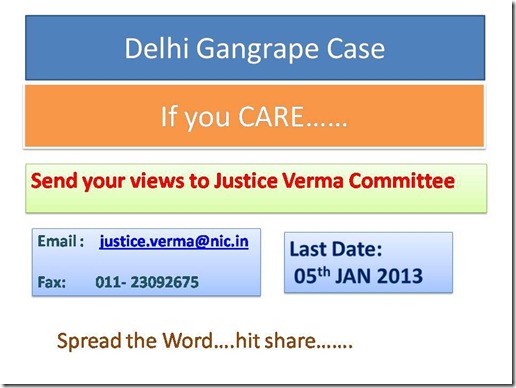 SUGGESTIONS FOR THE VERMA COMMISSION

The incident of brutal rape leading to death happening in the heart of the capital city took place at an intersection of dysfunctionality of the society and the state. The solution lies in effecting changes in both. Since what is being discussed here is the role of the state in making these changes, there are six kinds of interventions which need to be undertaken immediately, viz.

The suggested changes in each category are described below:

The Report has clear, cogent and easily implementable recommendations for more effective recruitment, training, and accountability of the police, mainly

CONCLUSION
Safety and quick resolution and punishment for crimes is a reasonable expectation by citizens from the state and its most basic function. It must always be the first priority of the state and its mechanisms need to be intrinsically designed to serve men, women, and all classes of citizens equally well. The intention of these suggestions is not to ask for any special treatment or protection for women. It is merely to ask for fulfilment of the promise of equality enshrined in the fundamental rights of the constitution, so that men and women are given equal respect regardless of gender or class, and can equally safely and freely lead their daily lives and strive to fulfil their potential.